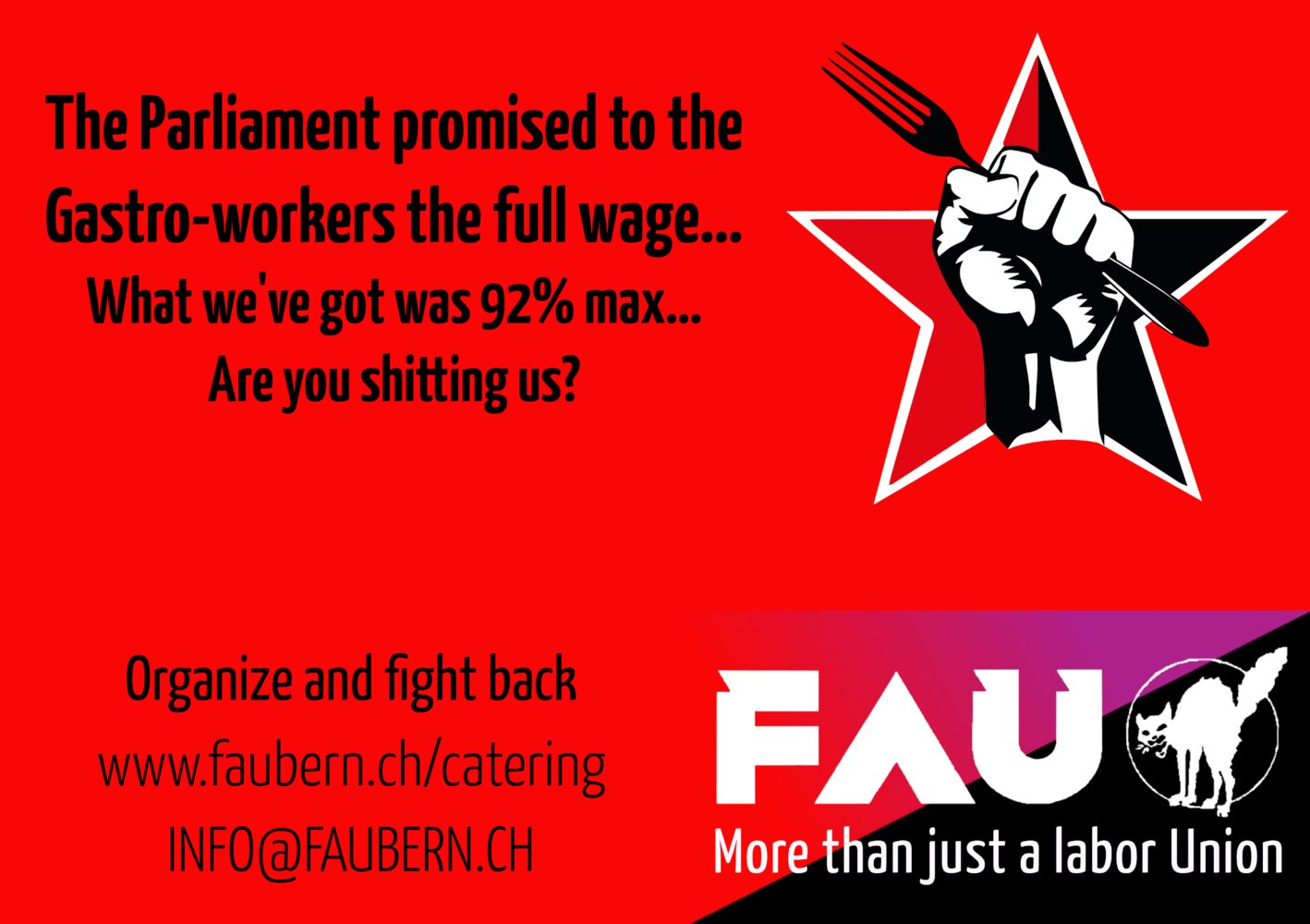 Since March, many in the catering industry a.k.a. "Gastro" have been struggling with massive wage losses. Therefore, many of us listened closely when on December 18, the parliament passed 100% short-time compensation for the low wages. The first pay slips now show that the reality is far from it. Hourly wage earners get a maximum of 81%, monthly wage earners a maximum of 92%.

Since the beginning of the COVID 19 pandemic, the catering industry has also been suffering. Since summer, the situation has become more desperate. The closures may be appropriate to the situation, but without compensation many businesses will not survive the next few months.

What is forgotten in all this is that the crisis and all these measures have hit us, the workers in the sector, hard. The wage losses are weighing heavily on many of us. Parts of the industry have long before only paid attention to our rights and our (mental and physical) health, when it suited them. With the existential threat to the companies, exploitation is only increasing.

The 100% compensation for short-time work promised by parliament has now turned out to be a lie. In fact, it is only 81% for workers paid per hour and 92% for those paid per month. This is an outrage and endangers our financial survival!

We gastro-workers must act together now. The government's strategy so far endangers the survival of many people and also of our industry!
The pressure on us gastro-workers will now grow even more.
Organise in the workplace and beyond. The situation is serious.

We have extended our demands 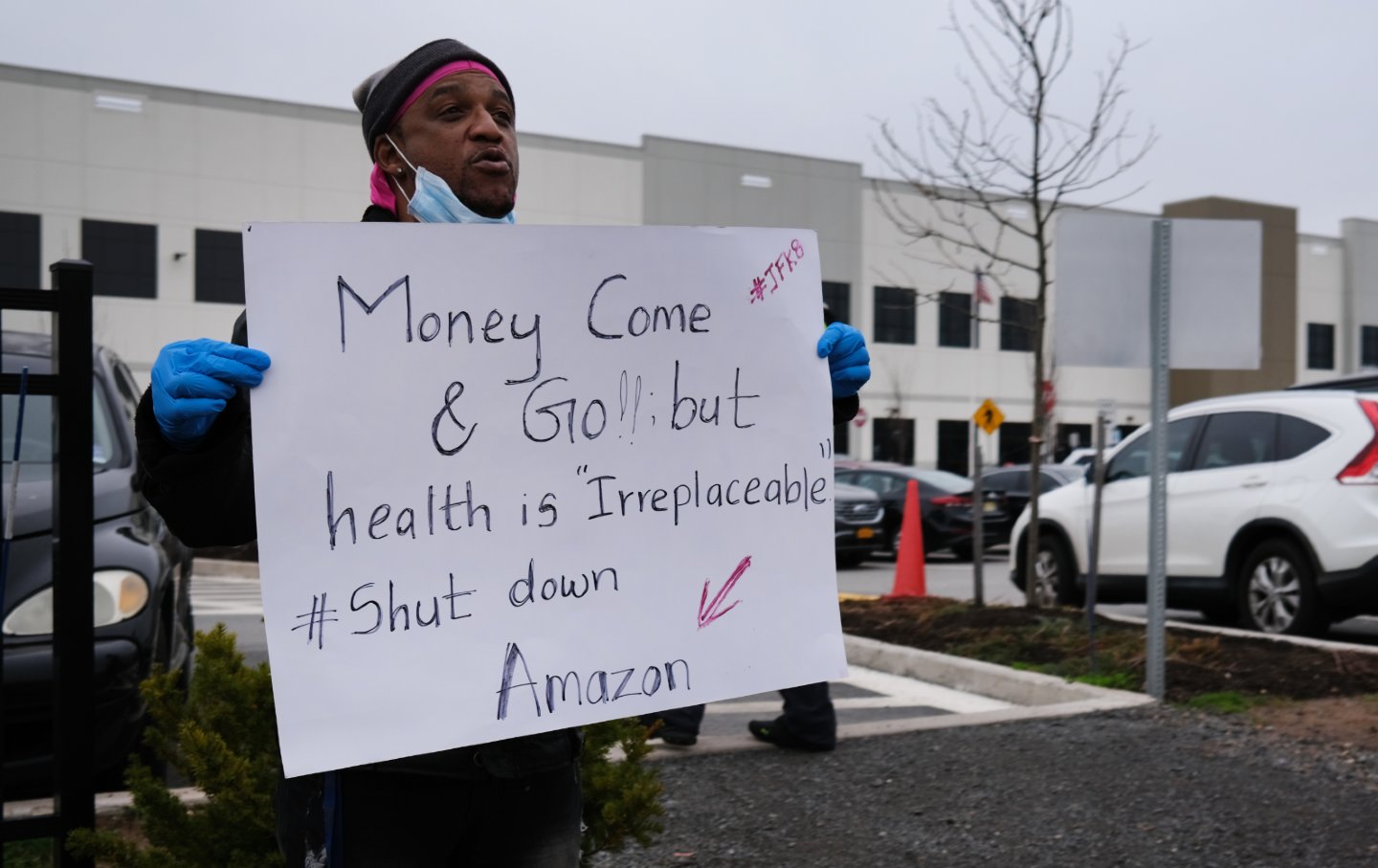 We are publishing an interview with Gianpaolo, who has been working for eight years in the Amazon warehouse in Piacenza (MXP5) and who participated in September at the Amazon Workers International assembly in Lille, which was attended by workers from France, Germany, Poland and the United States. In the months of the pandemic, the transnational organization of Amazon workers made a step forward with a wave of protests and strikes that shook the warehouses all over the world and a series of common standings and shared claims at the transnational level that frightened the company, forcing it to react. More than 19,000 Amazon workers caught Covid in the United States alone, according to a report on the contagion that the company published with extreme delay and after multiple requests. Gianpaolo says that, at the beginning of the pandemic, in Piacenza Amazon agreed to introduce health measures only because it was forced to by a thirteen-day strike and by a mass refusal to go to work for fear of the contagion. Moreover, the problem of the sanitary conditions in the warehouses predates the pandemic, while Amazon takes advantage of the social-distancing measures as a means to harden control on the workers and enforce discipline in the warehouses. The wave of strikes in recent months has been important not only because it forced the company to increase salaries and take steps back from the initial unwillingness to respect minimum safety conditions, but also because it showed workers around the world that “they are not totally alone”. For this reason in Italy it is so important to establish connections with other warehouses in Europe and beyond. With Gianpaolo’s words, “to beat Amazon we need a greater force than to beat any other adversary”: the transnational organization is the way to accumulate this force. In this direction, Lille assembly decided to undertake a common campaign towards Black Friday, putting at the center the request to maintain the bonus of two euros obtained during the first months of the pandemic and to fight together so that the anti-contagion measures are respected in the warehouses, since the emergency is still in progress.